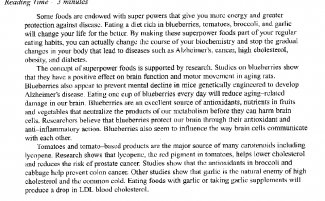 The reading passage presents some supporting points about superpower food, and states that this food provides more energy and prevents humans from many diseases. However, the lecturer contradicts each of this point and states that there is no scientific evidence that this food actually benefits humans, so people should not trust the research that are not approved scientifically.

To begin with, the reading passage states that according to many studies blueberry is superpower food, and it improves the function of brains and motor movements. However, the lecturer states that these studies are done on rats and mice. There is no correlation with humans and mice. This way, we can not trust on this kinds of research, which does not have enough data that proves the effect of this food on humans. Thus, this appears to be a contradiction to the information stated in the reading.

In addition, the reading passage states that according to the study, tomatoes and tomato based products are major source of carotenoids and help to reduce cholesterol and treat prostate cancer. However, the lecturer points out that this research is not scientifically proven, and creates misconception among people. They start eating this food in their diet, but this food does not prevent cancer and other disease. Thus, this disputes the point made in the reading passage about tomatoes.

Essay Categories
Integrated TOEFL Writing
This essay topic by users:
END_OF_DOCUMENT_TOKEN_TO_BE_REPLACED
Essays by the user:
Write an essay by this topic