The chart below gives information about southland's main exports in 2000, 20*..,and future projections for 2025.(20*..:for test purposes, use and refer to the current year)

The chart below gives information about southland's main exports in 2000, 20*..,and future projections for 2025.

(20*..:for test purposes, use and refer to the current year) 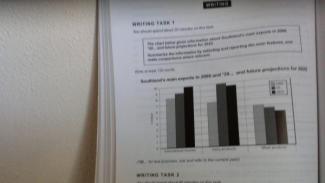 The bar chart depicts about southland's three major exports in 2000, 2017, and future projections for 2025.

Overall, it can be seen that the export of dairy products and international tourism are set to rise, while the meat products are predicted to decline in the end.

In detail, the international tourism stood at just over 8 billion in 2000 and gradually swells to 9 billion in 2017. By 2025, the rate will have ballooned to almost 10 billion, which will be the highest total of 2025. For the dairy products, it started the period with 7 billion in 2000. Although the rate was relatively low in 2000, 2017 witnesses a sharp surge, rocketing to nearly 10 billion. Despite soaring, the export is expected to experience a steady slid to about 9.5 billion in the next 8 years.

In contrast, meat products will exhibit an opposite trend, compared to other two products. The export started at 6 billion in 2000 and drops steadily to about 5.5 billion in 2017. Likewise, the product is expected to shrink progressively and finish the span at 5 billion, making it (5 billion) the lowest total of the given term.

Essay Categories
IELTS Writing Task I - IELTS Academic
This essay topic by users:
END_OF_DOCUMENT_TOKEN_TO_BE_REPLACED
Essays by the user:
Write an essay by this topic

Transition Words or Phrases used:
likewise, so, well, while, in contrast