Questions 27-33 are based on the following passage.


Comets are complex mixtures of ices and dust that orbit the Sun. They can be classified by orbital period as either long-period comets or short-period comets.


Short-period comets have orbital periods of 200 yr or less, and their orbital planes have inclinations 30° or less with respect to the ecliptic plane, the plane of Earth's orbit around the Sun. Portions of these planes are shown in Figure 1. 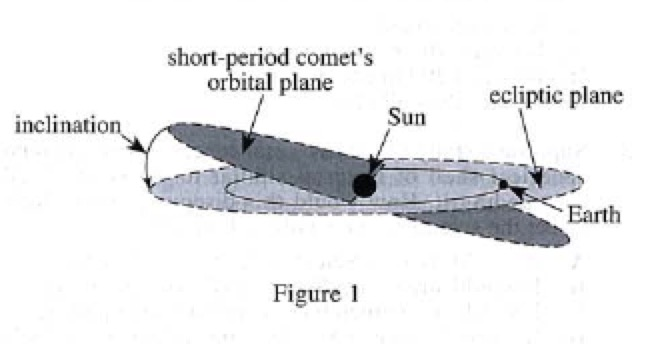 Two scientists present their viewpoints about the origin of short-period comets.


Short-period comets in our solar system originate within a thin ring-shaped region called the Kuiper Belt (KB). The KB has a small inclination with respect to the ecliptic plane and is located in the solar system between 30 A.U. and 50 A.U. from the Sun. The KB contains bil­lions of icy bodies with diameters between 10 km and 30 km. These comet-size objects are too small to be clearly discerned at that distance with telescopes located on Earth's surface. Such telescopes have gathered indirect evi­dence, but not clear images, of much larger icy bodies that are part of the KB. The small inclinations of short-period comets' orbital planes with respect to ,the ecliptic plane are consistent with an origin in the KB. It has been discovered that other nearby stars have similar regions of icy bodies surrounding them.