Questions 1-5 are based on the following
passage.


This passage is adapted from Lan Chaplin and Michael Norton’s “Why Don’t You Want to Sing and Dance in Public?” © 2015 by Scientiﬁc American.


Picture two birthday parties: one for 4 year olds, and one

Birthday” and putting their left feet in during the “Hokey
Pokey”; the second conjures slump-shouldered teens huddled
5 in corners furtively glancing at each other—even as loud

music blares in the background. Why the difference? Our

research suggests that the process of kids losing the joy of

singing and dancing is intricately linked to a crucial

development in their understanding of other people.
10 We tested the link between the ability to understand the

minds of observers and willingness to perform with a test of

order: sing a song of their choosing, perform a dance of their
15 choosing, circle red shapes on a page, or color in a square.

front of us-right then and there. The ﬁrst two tasks were our

performance tasks, made even more difﬁcult by the fact that

the singing and dancing had to be completed without any
20 musical accompaniment. The second two tasks were our

“control” tasks, which we made deliberately boring to see if

older kids would still choose these over the terror of

performance.
The differences between kids of different ages were
25 surprising even to us. Whereas some 31% of 3-year olds

chose to both sing and dance, not a single child aged 11 or 12

chose to avoid both singing and dancing, nearly 75% of 11-

and 12-year olds chose to avoid both.
30 Why such a change in preferences? We next measured

performance, using a task that measures “Theory of Mind”-

or our ability to understand that others have minds and

opinions that differ from ours. . . [An] increase in Theory of
35 Mind was strongly and negatively correlated with children’s

desire to sing and dance: the higher children scored on our

others can have a different opinion of their abilities—the

more likely they are to refuse to perform. And this trend held
40 among our youngest participants: 3- and 4- year olds with a

more developed Theory of Mind were more likely to avoid

singing and dancing.
Our data rule out a salient alternative explanation for our

pattern of performance avoidance, one familiar to anyone
45 interacting with socially awkward teens or tweens: as

children enter puberty they experience a host of changes that

decrease their desire to perform. However, our results show

that the shift away from performance begins as early as age

4-years before children enter puberty-suggesting that these

changes associated with puberty are unlikely to account for 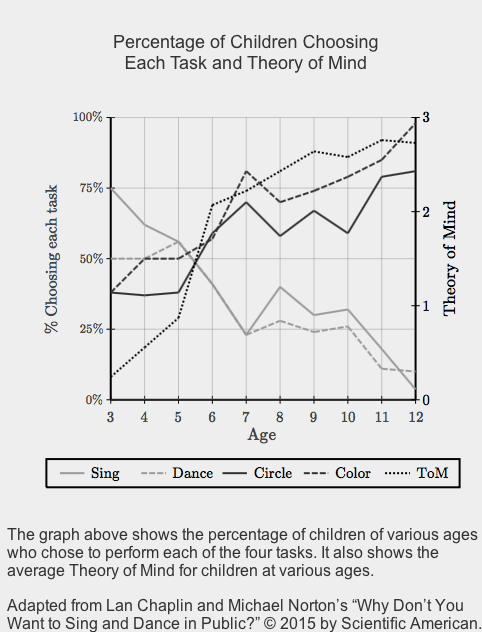