This passage is adapted from Jan Delhey and Christian Kroll, “A ‘Happiness Test’ for the New Measures of National Well- Being: How Much Better than GDP Are They?” ©2012 by WZB Berlin Social Science Center.


There is currently a broad global movement away from

considerations of mere economic success towards a new

public policy goal involving a broader notion of quality of
life. This movement has also spurred a rethinking of which
5 statistics inform us best about a country’s situation and how

its citizens are faring. For decades, the gold standard was a

calculated per capita. This is the most prominent yardstick

that the media, politicians and the public consider when they
10 try to assess how a country is performing. However, this

nations (as its creator Simon Kuznets warned in the 1930s)

and so there is growing skepticism about the GDP’s

usefulness as a measure of national well-being. Slogans such
15 as “beyond GDP” or “redeﬁning progress” challenge the

preoccupation with the GDP.
Three key strategies have been employed to develop a

complementing the GDP, and replacing the GDP .
20 The ﬁrst group of initiatives tries to deal with the

downsides of the GDP by attempting to ﬁx the indicator

itself. . .
One key aim of this group of measures is to account for

sustainability and the environmental damage associated with
25 GDP growth. For example, the Index of Sustainable

Economic Welfare and the Genuine Progress Indicator are

both based on the consumption of private households.

However, they also reﬂect additional social factors such as

household labor and education with a rising value, while air
30 pollution and environmental damage lower the score. As a

consequence, the downsides of economic growth and

modernization ought to be accounted for whilst retaining the

beneﬁts of the GDP, namely a single ﬁgure that captures

different entities and is comparable across nations.
35 The second group of measures moves further away from

the GDP as a yardstick than the previous approaches but does

not abandon the sum of goods and services altogether.

Instead, this group of measures seeks to assess national well-

being by complementing the GDP with a number of key
40 social indicators.
For example, the Human Development Index comprises

conditions, which are measured by life expectancy, years of

schooling, and GNI [gross national income], respectively.
45 While the method of complementing the GDP with further

indicators is able to overcome the controversial monetization

from which the measures that try to “heal GDP” suffer, the

standardization of different units is also controversial. In

value judgements by the researcher.
The most radical departure from the GDP is embodied by

the third group of measures, which seeks alternative

indicators of well-being without accounting for the sum of
55 goods and services produced in an economy. The logic

behind this approach is that the GDP has always been and

remains a means to an end rather than the end itself.
Famous examples include the Happy Planet Index

calculated by the New Economics Foundation. The index
60 comprises life expectancy, life satisfaction, and the

ecological footprint and is therefore able to demonstrate how

many resources countries need in order to produce a certain

level of health and subjective well-being.
Replacing the GDP altogether is quite a drastic strategy
65 for assessing national well-being, as not only is economic

growth a prerequisite for many of the social goods that make

life enjoyable but the metric of GDP is also highly correlated

with such other factors. Thus, by arguing that the GDP is

only a means to an end, these measures are in danger of
70 making a conceptual assumption that is notable in theory but

can be challenged in practice on the basis of actual causal 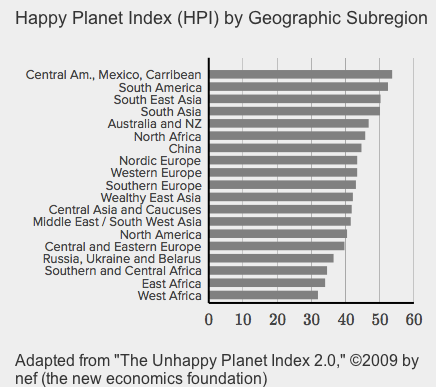