Google, and Bebo, have grown in popularity in recent years

and they provide an exciting new area of study in the ﬁeld of
psychology. Facebook provides individuals with easy access
5 to view personal information about their friends, coworkers,

active users and every month over 700 billion minutes are

was designed to investigate the relationship between

Facebook use, the importance of quality of friendships to

self-esteem, and personality in college students.
Social relationships are considered by many to be the most
15 important component of human life. With the expansion of

the Internet and social networking sites, more people are

using technology to communicate with their friends and

family online and maintain these interpersonal connections in

novel ways that were not available in previous generations.
20 Some researchers initially believed online activities

communication would replace face-to-face interactions and

deteriorate social bonds. Others, however, have found

connected with others and increased relationship closeness

and connectedness. Social networking sites, such as

Facebook, allow users to add “friends” and keep track of

their status, interests, photos, “likes,” and updates of others’
30 personal information in cyberspace.
Internet use is related to both positive and negative

psychological and social factors, but the key to understanding

these outcomes is through examining speciﬁc types of

Internet use instead of simply the amount of time spent
35 online. While using social media can have positive beneﬁts

connectedness, and identity development, it can also lead to

exposure to inappropriate content, and other negative
40 consequences related to general well-being. For example, a

negative relationship has been found between time spent

decreased social and emotional adjustment.
With respect to self-esteem, the research is also mixed,
50 especially considering the different types of self-esteem. In

certain cases, excessive Facebook use may be related to

their friends online. In addition, researchers have found that

may beneﬁt from the social opportunities provided by the

value their friendships to stay informed about social events

and this technology may be particularly important and highly

succeeding... Related to the current investigation, the quality

of friendships and how this quality affects self-esteem may

be correlated with the frequency and intensity in which

dimensions of themselves may engage in increased social 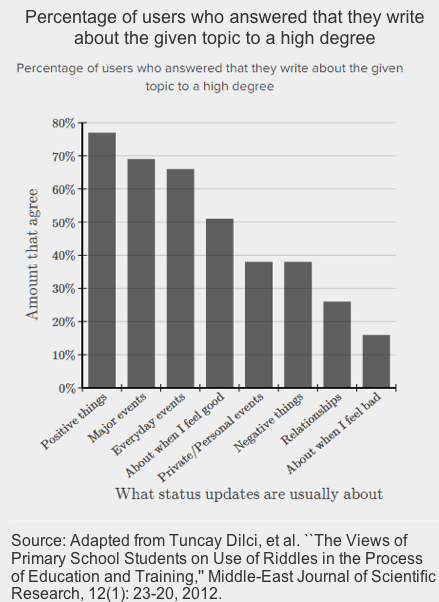