Adapted from “A Molecular Model of Blood Cell Renewal.” © 2004 by the Public Library of Science.


A developing organism captured on time-lapse video is a

wonder to behold. If you're watching a chick embryo, by day

3, you'll see millions of cells engaged in a frenzy of activity,
Line as rapidly dividing cells migrate to new positions, acquire the
5 haracteristics of specialized cells, and craft well-defined

tissues, organs, and limbs in just under two weeks. In

addition to the cells destined for specialization is another

different fates. They can either “self renew”—that is, make
10 identical copies of themselves—or generate intermediate

progenitor cells that give rise to mature, differentiated cells.
Both differentiation and self renewal are guided by an

embryonic stem cells into the many different cell types that
15 make up the body. Adult stem cells share the hallmark trait of

self renewal, but are relatively rare: in bone marrow, the

source of hematopoiesis, or blood [formation], only an

hematopoietic stem cell (HSC).
20 Studies that have compared the gene expression profiles of

different types of stem cells to identify genetic signatures of

“stemness” have found only a limited number of signature

genes. And the molecular mechanisms that regulate this so-

called potency and the self renewal process have remained
25 obscure. Now, focusing on HSCs, Margaret Goodell and

colleagues have undertaken a systematic evaluation of HSC

with discrete stages of the HSC self renewal cycle and

activation and proliferation, and a return to the dormant state.

HSCs give rise to both red blood cells, which carry oxygen

and carbon dioxide, and white blood cells, which fight

infection. Once activated by a trigger, dormant HSCs engage
35 a regulatory program that rapidly churns out billions of cells,

then puts the brakes on cell division, prompting the return to

a nondividing, quiescent state.
To understand the genetic programs underlying this

process, Goodell and colleagues induced proliferation in
40 HSCs (with the chemotherapeutic drug, 5-fluorouracil, or

5FU), then allowed the cells to return to quiescence, so they

could characterize the changes in gene expression that

occurred during each stage. They compared these time-

divide at all) to find genes associated with the two different

states.
Genes were grouped into proliferating or quiescent groups
50 based on when they were expressed after 5FU treatment, and

these groupings were refined based on comparisons to

analysis of these genes found a bias toward genes involved in

cell division processes in the proliferation stage and toward
55 cell division inhibitors in the quiescent stage, supporting the

logic of the groupings.
With these results, Goodell and colleagues constructed a

model of the HSC self renewal cycle: quiescent HSCs

maintain a “state of readiness,” molecularly speaking, that
60 allows a quick response to environmental triggers. A stressor

to proliferate” state—a kind of pregnant pause—and then the

proliferation machinery kicks in, going through an early and

late phase before quiescence returns. By shedding light on
65 the molecular mechanisms of stem cell renewal, this study

which depend on replicating the HSC self renewal cycle to

replenish diseased or damaged tissue, and will ultimately

guide efforts to grow stem cell colonies outside the body, a
70 long-standing goal that would have many clinical 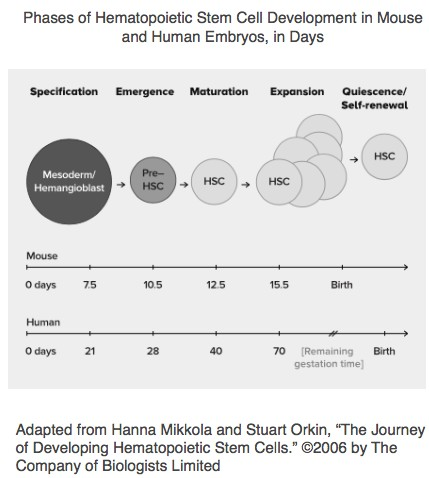