please give a band score for this. 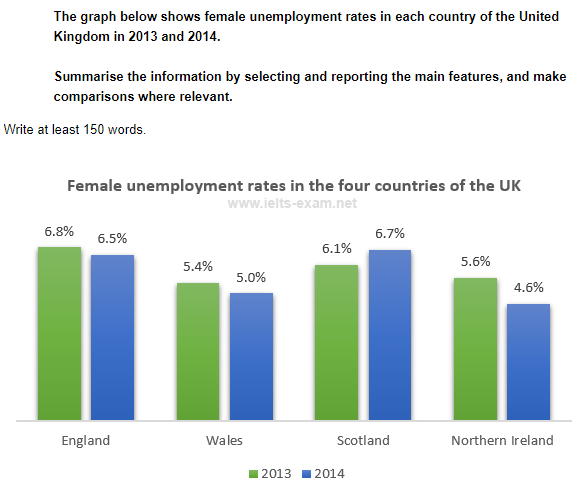 Q. The graph below shows female unemployment rates in each country of the United Kingdom in 2013 and 2014.

A. The given bar chart represents the rate of unemployment among females in four countries of the United Kingdom in the years 2013 and 2014.

In the year 2013, England had the highest percentage of unemployed females accounting to 6.8% which was closely followed by Scotland at 6.1%. Wales and Northern Island were lower, comparatively, in female unemployment rates, at 5.4% and 5.6% respectively.

Surprisingly, female unemployment rate rose by 0.6% in Scotland whereas it decreased by 0.3% in case of England in the year 2014. In case of Wales, it decreased to 5% in the same year. A similar trend was seen in Northern Ireland where percentage of unemployed female was lowest among all nations in the United Kingdom, it was mere 4.6% in the year 2014.