Essay topic: In surveys Mason City residents rank water sports (swimming, boating, and fishing) among their favorite recreational activities. The Mason River flowing through the city is rarely used for these pursuits, however, and the city park department

Essay topics:
Essay topic: In surveys Mason City residents rank water sports (swimming, boating, and fishing) among their favorite recreational activities. The Mason River flowing through the city is rarely used for these pursuits, however, and the city park department 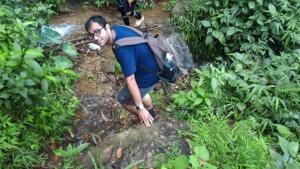 The author of the argument points towards the results of a survey claiming that the citizens of the Mason City ranks waters ports among their favorite recreational activities. This, according to him is a sufficient reason for the government to spend more money on riverside recreational facilities.However, this argument is flawed in various aspects.

Furthermore the author tells that the river has rarely been used and that, there were complaints about bad smell. If this is the case, then the first thing is to identify whether the water of the Mason River is safe for water sports or not. There may be industries around the Mason River which might be dumping hazardous effluents in the river which may prove to be harmful for the citizens. If that is so, the government must first spend on the cleaning of the river as it is a more important issue compared to recreational activities.

The author also cites that the governments spending on the river will increase the water sport activities. But it is not clear why this trend is possible. The citizens might actually visit water parks for the fulfillment of their enjoyment. Moreover, the river bank might be far away from the city and thus not feasible for the citizens to visit on a regular basis. Unless there is a record of how the spending will increase the people's interest in water sports, it will not be possible to make the prediction
the writer has made.

In general, it can be said that the author has failed to make a convincing argument. The argument ends with an entirely unjustified optimistic conclusion. It would have been wise for the author to consider the factors mentioned above.