Answer the writing task 1 below : The maps show the outskirts of the town of Fosbury in 1980 and 2015. Summarise the information by selecting and reporting the main features and make comparisons where relevant. 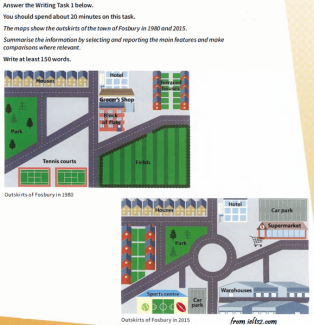 The maps show changes to the suburbs of Fosbury from 1920 to 2015. Overall, there were a number of notable changes to its facilities and accommodations during that period. The most striking alteration is to the construction of the warehouse replaced of the fields. The terraced of houses in the corner in the east was removed and it was used to build a car park and supermarket. Furthermore, grocer's shop and block of flats were knocked down. Another major change in the area is the development of recreational features. It can be seen that tennis courts were renovated by sports center and car park in 2015. The park was relocated to the beside the area. In 2015, the three-way crossroads which led to a block of flats was converted to the roundabout. To summarise, the field was replaced by warehouses and many new recreations were built in the twenty-five years between 1980 and 2015.

Essay Categories
IELTS Writing Task I - IELTS Academic
This essay topic by users:
END_OF_DOCUMENT_TOKEN_TO_BE_REPLACED
Essays by the user:
Write an essay by this topic