The charts below show the changes in ownership of electrical appliances and amount of time spent doing housework in households in one country between 1920 and 2019. 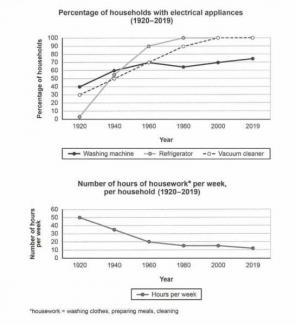 The two line graphs illustrate the percentage of electrical appliances with washing machines, refrigerators, and vacuum cleaners in households and the number of hours per week spent on household chores from 1920 to 2019.

Overall, a long period revealed that the more electrical equipment was applianced, the less time for people to do chores every week. Besides, the frequency of refrigerator spending witnessed an outstanding growth in 99 years, which exceeded other equipment.

With regard to the proportion of electrical appliances in households, all of them significantly increased over nearly a century. It is undeniable that there was the most considerable change in refrigerator spending from a small fraction in 1920 to 100% in 1980 and the trend stayed stable till 2019. Meanwhile, although the highest percentage of electrical expenditure in 1920 belonged to washing machines, it experienced a gradual climb and stopped at more than 70% in 2019.

In contrast, the amount of time spent on housework such as: washing clothes, preparing meals and cleaning per week tended to sharply decrease in the first 20 years and went down slowly till 2019. In 1920, when electricity was not popular with families, the number of hours of housework per week stood at 50%. In 2019, however, the figures declined by 40% due to the electrical appliances.

Essay Categories
IELTS Writing Task I - IELTS Academic
This essay topic by users:
END_OF_DOCUMENT_TOKEN_TO_BE_REPLACED
Essays by the user:
Write an essay by this topic

Grammar and spelling errors:
Line 5, column 282, Rule ID: WHITESPACE_RULE
Message: Possible typo: you repeated a whitespace
Suggestion:
...920 to 100% in 1980 and the trend stayed stable till 2019. Meanwhile, although th...
^^
Line 7, column 310, Rule ID: ENGLISH_WORD_REPEAT_BEGINNING_RULE
Message: Three successive sentences begin with the same word. Reword the sentence or use a thesaurus to find a synonym.
...urs of housework per week stood at 50%. In 2019, however, the figures declined by ...
^^

Transition Words or Phrases used:
besides, first, however, if, while, in contrast, such as, with regard to