The charts below show the changes in ownership of electrical appliances and amount of time spent doing housework in households in one country between 1920 and 2019.
Summarise the information by selecting and reporting the main features, and make comparisons where relevant. 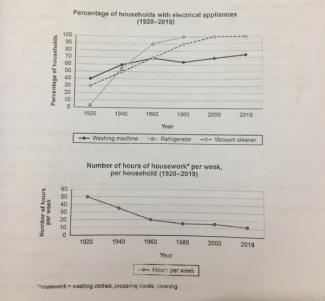 The line graphs compare the shifts of percentages of households in using three different forms of electrical devices and depict figure for hours taken to do chores per week per household in one country over a period of 99 years (1920-2019).

Overall, the percentage of households who applied each kind of electrical utility almost increased; however, the number of hours spent doing chores declined during the period shown.

From 1960 to 2019, the percentages of households running refrigerator and vacuum cleaner rose and reach two peaks of 100 percent in 1980 and 2000 respectively; then, those figures stayed unchanged during the rest of the period. There was a slight growth in the percentage of households using wasing machine, by only 35 percent. In addition, the households spent less time in doing chores, only 10 hours each week, in 2019.

Essay Categories
IELTS Writing Task I - IELTS Academic
This essay topic by users:
END_OF_DOCUMENT_TOKEN_TO_BE_REPLACED
Essays by the user:
Write an essay by this topic

Transition Words or Phrases used:
however, if, then, while, in addition, kind of