Quantities of goods transported in the UK between 1974 and 2002

Quantities of goods transported in the UK between 1974 and 2002 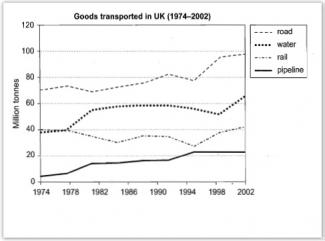 The line graph illustrates the weight of commodities circulated in the UK from 1974 to 2002 by four different means of transportation.

Broadly speaking, all modes of transport experienced a net rise and the quantities of goods delivered via road were significantly greater than those through any other means.

The only exception to the alternate rise and fall above was the usage of pipeline for transportation of goods. The trendline for this mode of transport exhibited an upward trend from 1974 to sometime after 1994 before reaching a stable plateau at 21 million tonnes until 2002.

Essay Categories
IELTS Writing Task I - IELTS Academic
This essay topic by users:
END_OF_DOCUMENT_TOKEN_TO_BE_REPLACED
Essays by the user:
Write an essay by this topic