The two maps below show road access to a city hospital in 2007 and in 2010.Summarise the information by selecting and reporting the main features, and make comparisions where relevant.

The two maps below show road access to a city hospital in 2007 and in 2010.
Summarise the information by selecting and reporting the main features, and make comparisions where relevant. 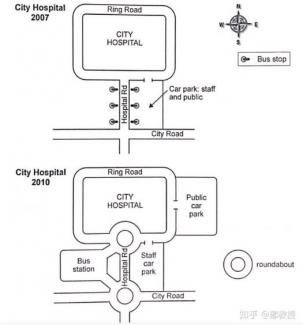 The given maps illustrated how road entrance to a town hospital has developed over two different time periods (2007 and 2010).

Overall, road access had not any considerable increase in size. Meanwhile, there was some significant changes in infrastructure, locations and facilities over the given period.

In 2007, the hospital of city was located in the centre which was covered by the Ring Road that still remained the same as in 2010. Furthemore, there were totally six-bus stop along two sides of the Hospital Road. The car park used for both staffs and public which lied south east of the town hospital.

As can be seen from map in 2010, the two roundabout was built at the beginning of the Hospital Road to its junction with the City Road. The parking area was extended to different separated spaces, one is in the east side of City Hospital for public and one used for staffs was not moved. In addition, to the south west of City Hospital, there was a bus station which can be lead from two aspects of the roundabouts.

Essay Categories
IELTS Writing Task I - IELTS Academic
This essay topic by users:
END_OF_DOCUMENT_TOKEN_TO_BE_REPLACED
Essays by the user:
Write an essay by this topic

Transition Words or Phrases used:
if, so, still, while, in addition