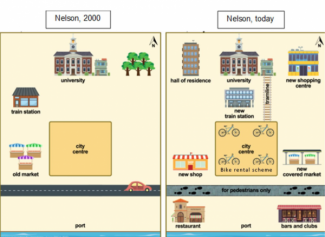 The maps below demonstrate the changes in Nelson’s city between the year 2000 and today. Generally, it is clear that the city has recently experienced significant modernization due to various changes in facilities and transportation.

During the development of Nelson, the university building is seen to be the only place that remains unchanged amid urbanization. There is a new tramline that has been made besides the new train station, assisted to connect the university and the city center together. Furthermore, on the north-western corner, next to the tertiary, an empty space in 2000 has now become a hall of residence. Besides, it is also noted that there is a change in the transformation of Nelson's shopping trend, with the proof being the replacement of an old market with a new shop on the west side, a completely new covered market on the other side, and the construction of a new shopping center on the green area.

On the other hand, if we look forward to the lower part, the port area, which used to be deserted, has now become more energetic with the current open-range of entertainment facilities such as the restaurant (on the South-West), bar and clubs (on the South-East). And the road has been pedestrianized only. Finally, one more other interesting is that a bike rental scheme has been offered by the city centre.

Essay Categories
IELTS Writing Task I - IELTS Academic
This essay topic by users:
END_OF_DOCUMENT_TOKEN_TO_BE_REPLACED
Essays by the user:
Write an essay by this topic

Transition Words or Phrases used:
also, besides, finally, furthermore, if, look, so, such as, on the other hand