The charts below show the changes in ownership of electrical appliances and amount of time spent doing housework in households in one country between 1920 and 2019.
Summarise the information by selecting and reporting the main features, and make comparisons where relevant 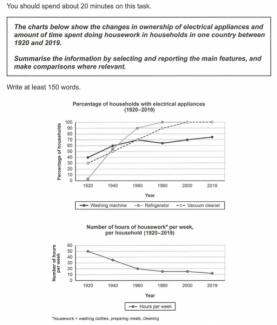 The given line graphs illustrate how the ownership of electrical appliances and amount of time spent doing housework changed over a period of 100 years starting from 1920.

Looking from an overall perspective, it is apparent that there was a gradual increase in the proportion of household appliances while the opposite was true to the hours spent doing housework per week.

The percentage of electrical households reached the lowest point of 0 for refrigerator, 30% for vacuum cleaner, 40% for washing machine and started to grow noticeably. The year 1980 witnessed a dramatic increase to 100% in the proportion of refrigerators and remained stable 2 years after while vacuum stayed unchanged 20 years later than freeze, at around 100%. There was a fluctuation in the percentage of washing machines until 2000 and it increased slightly to 75% in 2019.

Essay Categories
IELTS Writing Task I - IELTS Academic
This essay topic by users:
END_OF_DOCUMENT_TOKEN_TO_BE_REPLACED
Essays by the user:
Write an essay by this topic