The chart below shows what Anthropology graduates from one university did after finishing their undergraduate degree course. The table shows the salaries of the anthropologists in work after five years. 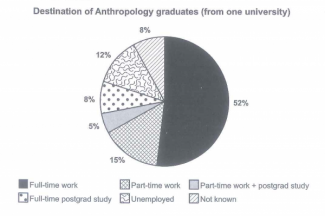 The figures depict different statuses of a specific class of anthropology graduates. In the pie chart, the distribution of the different lanes is shown. Then, the correspondent salaries of the working segments among them are illustrated in the table.

Putting aside the 8 percent with unknown destination, 52 per cent of the total students settled to a full-time job, nearly an absolute majority. Those who took on a part-time job were remarkably less, with only 3 in 20 students. Close to this, however, was the sum of paths involving Academia, which was almost identical to the unemployed segment.

As for 5-year experience salaries, they appear to be much more rewarding for independent consultants and state employees than for those in the private sector. That is, 8 in 10 employees working in the former fields were earning above 75 thousand dollars annually. Private employees with the same payroll, however, represented only 55 per cent, barely exceeding a half.

All things considered, the majority of anthropology graduates were likely to be employed after college. Given they have a five-year experience, the best opportunities for them would be found either in the public sector or as freelancer advisors.

Essay Categories
IELTS Writing Task I - IELTS Academic
This essay topic by users:
END_OF_DOCUMENT_TOKEN_TO_BE_REPLACED
Essays by the user:
Write an essay by this topic

Transition Words or Phrases used:
but, however, if, so, then, as for