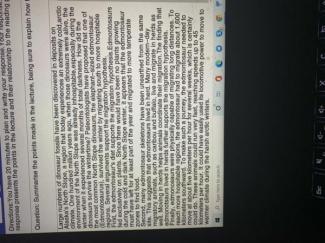 In this set of material, the reading and listening both discuses the migration of Edmontosaurus. The writer strongly postulates that Edmontosaurus had survived the winter by migrating to the south and provides three theories to endorse its idea. However, the lecturer clearly refutes the claims by stating that they are dubious and unconvincing, and gainsays each of them.
First and foremost, the writer beginst by asserting that because there was dearth of food supply for Edmontosaurus during the harsh climate of winter, they migrated to warmer temperate zone. On the other hand, the speaker dismisses these points by mentioning that weather condition of north slope was lot warmer in the past unlike today, therefore animal could not have any need for migration. On top of that, warmer weather had supported vegetation in the summer and had provided the edmontosarus with dead nutrional plants during the winter too. Hense, this claim is wrong.
Furthermore, the lecture posits that living in herd did not mean that every herd migrated too. To be more specific, living in herds serves other functions such as it provides the animal with protection from the predators. He examplify his claim by Elk that they lived in herds in the same area but did not migrated. these claims clearly refutes the writer's implication that because edmontosaurus lived in herds, they would have migrated too like all herds animals.
Ultimately, the writer wraps its arguments by stating that the animal had ability to run extremely fast which enabled them to cover long distances towards south. NOt surprisingly, the writer takes an issue with that by contending that though adult had run fast , there were young animals in the herd too who are not physically capable to run such long distance swiftly. Moreover,when those left juvenile youngs would had fallen on ground, the other herd would not have left them alone and migrated to south.Not only this but also it had caused the speed of the migratory animals reduced too.

Essay Categories
Integrated TOEFL Writing
This essay topic by users:
END_OF_DOCUMENT_TOKEN_TO_BE_REPLACED
Essays by the user:
Write an essay by this topic