The bar chart below shows the number of students who chose certain university subjects in 2005. Summarise the information by selecting and reporting the main features, and makes comparisons where relevant. 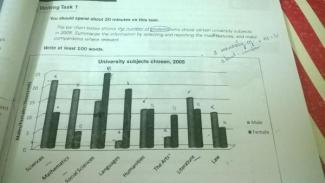 The given bar chart compares about how many students chose certain University subjects in 2005.

Overall, it can be seen that Social Sciences and Languages were the most popular courses for females, while Sciences and Mathematics remained the most preferred subjects among boys.

In contrast, the remaining subjects for both genders were not as popular as the discussed courses. Literature was chosen by 15,000 males, which was a bit larger than the counterparts at 12,000. The net figure for Humanities were equal at 12,000 each for both sexes. While females dominated the arts with 9,000 vs 3,000 (boys), males surpassed Law with 10,000 vs 6000 (girls) respectively.

Essay Categories
IELTS Writing Task I - IELTS Academic
This essay topic by users:
END_OF_DOCUMENT_TOKEN_TO_BE_REPLACED
Essays by the user:
Write an essay by this topic

Transition Words or Phrases used:
also, so, while, as for, in contrast

flaws:
'..., which was..' is repeated cross the content. Better not to repeat same styles in any essays.